I LOVE the idea of having a baby’s name above their crib.  I have seen really creative ways of doing it and….even before I ever got pregnant…..searched for how I would do this.  My only concern being that I didn’t want something that was heavy and could potentially fall and hurt the little one.

I was originally set on using the quilting hoops in different fabric colors and putting a letter in each of them, but it didn’t really go too well with the “shabby chic” theme of our nursery.  Instead I decided to use cardboard letters and try out Mod Podge with different fabrics to see what it would do.  I even found a tutorial that kinda gave me hope that this theory would work.  The only difference was that she used a hot glue gun and I was not about to burn up my fingers like that! :) Instead, I crossed those fingers and hoped that the Mod Podge fumes would not be bad for the baby….mother of the year right here… 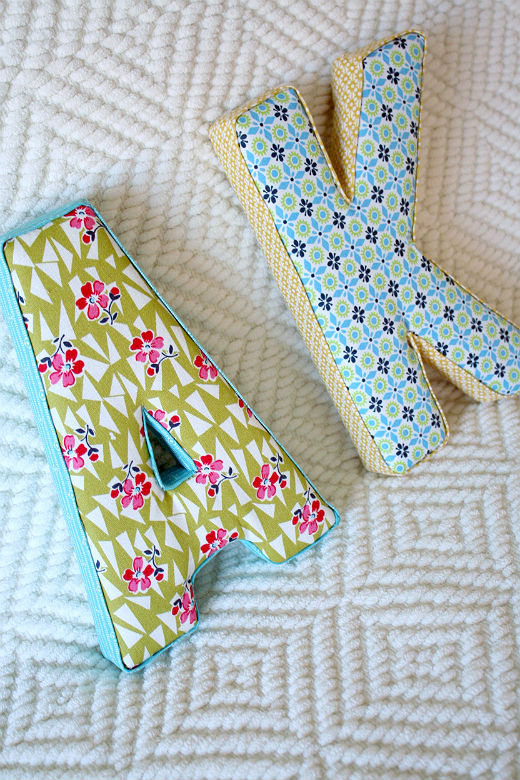 I give you….my first attempt (I was sure that I wasn’t going to need/be able to get the edges so cute like my inspiration had.)

Needless to say, my “just wing it” idea did not work. The frayed edges and crumpled sides is not really what I was going for. Now, I give you how to make actual cute letters.

Cardboard letters (mine were from Hobby Lobby- wait until they go 40% off!)

Fabric of your choice (I bought mine in 3/4 of a yard pieces which made a perfect length, however I bought 4 different types of fabric and had almost double what I would have actually needed to complete this project of 8 letters)

A foam brush to apply the Mod Podge

A pen to write on fabric with

I cut out a piece of fabric a little larger than the letter and covered the front surface of the letter in a coat of Mod Podge, smoothing the fabric out. (Other tutorials use padding in between these two but I really wanted my letters to have a flat surface.)

When I finished covering the surface of the letter, I cut a strip about 1 1/2 inch thick and 3/4 a yard long. (I tried my best to get it straight but didn’t spend a whole lot of time/energy on it.)

I then brought my strips to the ironing board and folded over a very small section on just one side of the fabric in order to have a nice and neat edge.

After ironing that edge to make it stay, I simply Mod Podged the strip around the sides of the letter.  This was a lot easier than I thought it was going to be!

A view of the edges…as you can tell, “straight” is not particularly my way of cutting.  (Since these are going to be laying flat against a wall…I wasn’t too worried about what the other edge looked like.)

My plan is to just make a hole in the back of the cardboard so they can easily hang on the wall….I will keep you posted on how that goes. :)

The fabric on the “N” is definitely a favorite!

My helper, who can’t be away from me for more than two seconds and desperately needs her haircut.  She is sleeping in my lap right now with her head rested on my arm as I type….ohh Roxy….she is not going to know what to do when this baby comes.

This lady is off to bed….yes it is only 7:45…but proctoring ISTEP all day while 7 months pregnant really takes a toll on you.